When CloudCaptain deploys your apps to AWS, a two-step process takes places. First, CloudCaptain creates Amazon Machine Images, simply known as AMIs. Using these, EC2 instances can then be launched.

AMI creation has traditionally been rather time consuming. So much so that many AWS deployment technologies chose to forgo custom AMIs and all their benefits, and instead go for the more brittle process of launching an instance from a standard AMI and customizing it on startup.

Not so with CloudCaptain. Not only does CloudCaptain fully embrace immutable infrastructure and the benefits of no SSH, but today, building upon last month’s release of Private Vault we are unveiling a new fast and secure AMI provisioning mechanism which works across all supported AWS regions called CloudCaptain FastAMI.

Today we are introducing CloudCaptain FastAMI: a transparent, fast and secure way to rapidly provision AMIs fully within your AWS account. 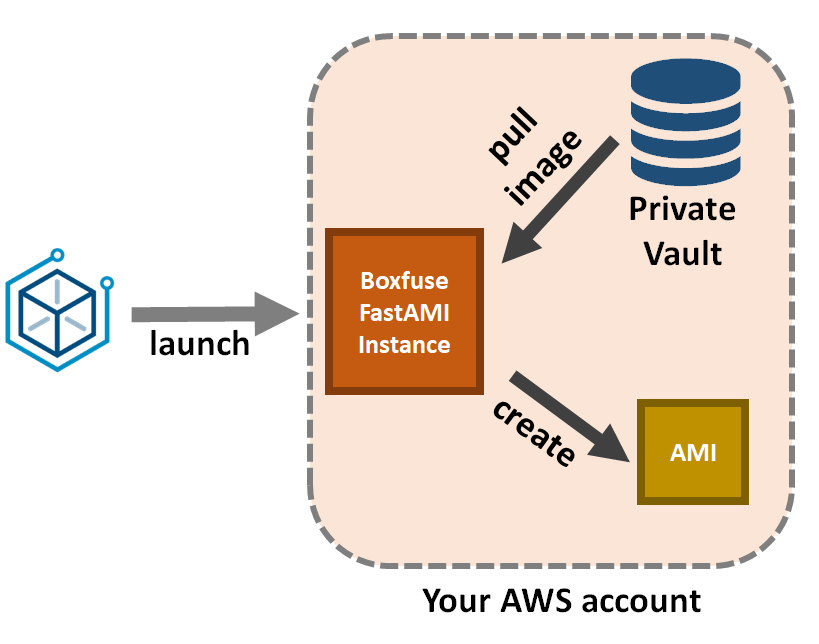 It works as follows: when CloudCaptain needs to create a new AMI it first launches a t2.micro instance in the default VPC of that region of your account. This instance then securily listens to AMI conversion requests. Once it receives such a request it pulls an image from your encrypted S3 private vault bucket and turns it into an encrypted AMI, all without the image data ever leaving your AWS account. This instance stays active until it hasn’t seen a new request for 60 minutes, at which point it terminates automatically.

This incurs a small cost of about 0.01 USD for AWS accounts that are no longer eligible for the AWS free tier. We felt this was a reasonable trade-off for all the the privacy, security and speed advantages of CloudCaptain FastAMI.

CloudCaptain FastAMI is available today at no additional charge to all CloudCaptain users who have already migrated their account to Private Vault. Support for this is fully transparent and initially available in the us-east-1and us-west-2 regions. The remaining AWS regions will be enabled in the coming weeks. Simply deploy images stored in your Private Vault to environments in any of those regions and you’ll automatically benefit from the privacy, security and speed advantages of CloudCaptain FastAMI. Enjoy!

So if you haven’t already, sign up for your CloudCaptain account now (simply log in with your GitHub id, it’s free), start deploying your application effortlessly to AWS today and have it running in minutes.